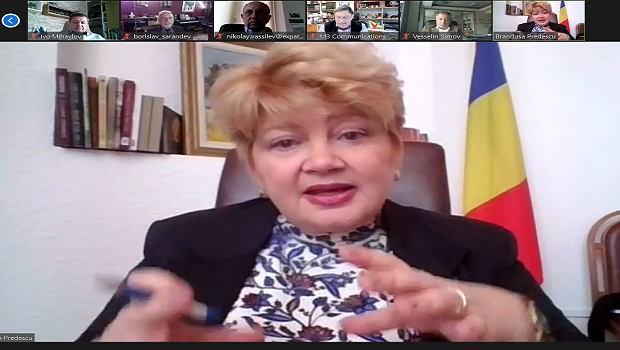 On the initiative "Meaningful Meetings", the Association of Honorary Consuls in Bulgaria (AHCB) held a meeting withH.E. Ms. Brândușa Ioana Predescu, Ambassador Extraordinary and Plenipotentiary of Romania to the Republic of Bulgaria

In addition to an overview of geopolitical relations, Ambassador Predescu shared her rich experience and views on the development of the European Union, the need for closer economic cooperation, infrastructure development and interconnection on the North-South axis, including through the Three Seas initiative.

Ambassador Extraordinary and Plenipotentiary of Romania to the Republic of Bulgaria

1993 – Admission to the diplomatic corps of Romania

1997 – seconded diplomat within the Secretariat of the Council of Europe, Strasbourg

2001  – Secretary of State, Head of the National Agency for Child Protection and Adoption, Government of Romania, Bucharest

2006 – 2008 – Director, Department for OSCE, Council of Europe and Human Rights in the UN System, Ministry of Foreign Affairs, Bucharest

2008 – 2012 - Consul General of Romania for Bavaria and Baden-Württemberg (in Munich, Germany)

June – December 2015 - Special Representative of the Romanian Chairmanship –in- Office of the Black Sea Economic Cooperation Organization/BSEC, based in Istanbul, Turkey