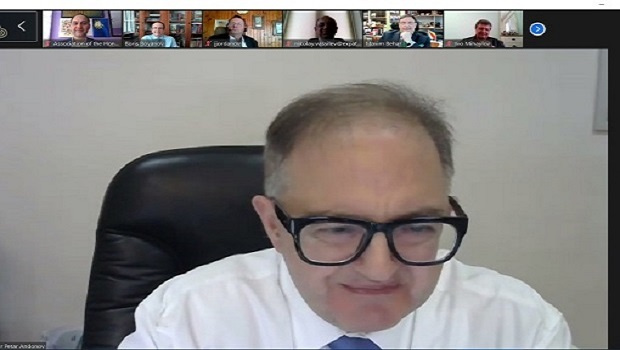 On the initiative "Meaningful Meetings", the Association of Honorary Consuls in Bulgaria (AHCB) held a meeting with Ambassador Peter Andonov, Head of the Bulgarian Mission in Jakarta, Indonesia, accredited to the countries of Southeast Asia - Indonesia, Singapore, Malaysia and Brunei East Timor, Permanent Representative of Bulgaria to the Association of Southeast Asian Nations (ASEAN), former Ambassador to Japan, the Philippines and the Republic of Korea.

The hot events in the region and the position of the ASEAN countries on the developing conflict in Ukraine were discussed, as well as the broader relationships between the countries in the region of Southeast Asia with Russia and the European Union.

In addition to an overview of geopolitical relations, Ambassador Andonov shared his extensive experience and views on possible trade and cultural relations with countries in the region where Bulgaria can play a greater role as a transport and logistics base for ASEAN products aimed at the Eastern European markets; setting up joint ventures in the food and light machinery industry; partnerships and the field of information technology, software services, ICT clusters and digital connectivity.To the ASEAN countries, with a total population of over 600 million people and some of the fastest growing economies, Bulgaria can diversify its exports to existing markets in Indonesia, Singapore, Malaysia with more value-added products and at the same time its main products ( wheat, food, cosmetics) to enter the markets of Brunei and East Timor. There is a great demand in the field of food security with products that are HALAL certified. Many other areas, such as tourism, cultural and scientific exchanges and student programs, have great potential in the region, for the development of which the Embassy in Jakarta is working hard.

The growing network of honorary consuls of Bulgaria in the countries of the region is a prerequisite for development, and the AHCB will seek to bring closer contacts with them.